The Girls Ate Last tells the story of Inder Kaur, an Indian woman growing up in the early 20th century. Girls were expected to eat last after the men and boys, and were often given only a few years of schooling. It is a story of women that is still repeated. With a Year 8 education, Inder Kaur, the author’s mother, turned the Partition of India into a personal victory.

Having to seek employment in Delhi, she educated herself one step at a time, as her marriage disintegrated, to become the founding principal of three women’s colleges.

To buy the book

The Girls Ate Last is available from quality booksellers in Melbourne, including the Eltham Bookshop .

For a long time it was a secret that my uncles Swaran and Khojinder were actually my mother’s step-brothers. Of Baiji, her stepmother, I knew nearly nothing until my mother began to tell her story. I did not know her for she died in 1940, four years before I was born. I had never seen her photograph. I did not know her name. That in itself does not say much. I did not know Mummy’s mother’s name was Sant Kaur or that Mummy’s father’s name was Ganga Singh till I began writing the story. I never heard my mother tell the name of her Naniji. But as it turned out, Baiji’s name was also Sant Kaur. It was a strange coincidence that Mummy’s father had married three women, all of whom were called Sant Kaur.

From honoured guest to stepdaughter

When Nanaji died and Mummy went to live with her father and stepmother, her status changed from that of honoured guest to stepdaughter. There were two major areas of conflict. The first was over food, an area where Baiji ruled. It was also the arena where the differences between men and women, boys and girls, were most evident. The second tussle was over jewellery. Baiji sought possession of the previous wife’s jewellery as a symbolic expression of her status. Talking of the first two years in her father’s house with her stepmother, Mummy lowers her voice. They were hard years, she says, and then suggests that perhaps this is not something I want to write about. Baiji would serve Bauji in the largest plate, then Khojinder, her brother, who was born when she was six. “Baiji herself would have little”, Mummy says, “but mine was always the smallest. I knew which portion was mine, because she gave me the least.”

The contrast with her grandfather’s house was stark. My mother laughs painfully. Baiji herself would have no breakfast. She would drink tea and give tea to Mummy too. No milk and no breakfast. Later, when Mummy visited Baiji’s village, she found it was the general practice that the girls ate after the boys and ate less. Mummy said Baiji’s behaviour then became clear: “Even if she had had her own daughter, she would have given her less. But I used to get very angry. I used to think she gives me less because she is my stepmother. She did not stint on food as such. I could have as much roti as I wanted. But on summer mornings she would not give me breakfast. Don’t know why. Just like that. Even now it pains me to remember that every third morning she would give me a drink of milk diluted with water only. She would give me nothing to eat in the morning.”

Winters were different, for Bauji went to work at 9 a.m. and Mummy and Khojinder also went to school at the same time. Swaran was ten years younger than Mummy and was still at home. A favourite meal was roti, that is bread cooked on a griddle, with cauliflower in the morning. Baiji would put ghee inside – to get the roti a bit crisp – then crumple it till the air came out. It was so delicious that after Baiji’s death, Mama Swaran used to ask Mummy to make him a roti with cauliflower like Baiji used to make. But in summer when she left for school at 7 a.m., those were the mornings without food. “I used to get four paise as a scholarship every morning”, Mummy said. This was a time when four paise made an anna and 16 annas made a rupee.

“Baiji would give me two paise out of it, and with that I could get a puri. She would think, ‘What does she need to eat here? She can eat a puri.’ So then during the break, at 9 or 10, I would eat a puri. I began to take the money too. She would keep the money under a cloth near the fire. I was hungry. She found out, and I told her, ‘Yes, I have taken the money.’ She got angry. But she could not string me up, could she? So I got into the habit of stealing. I would eat two puris then.”

Bauji knew that Baiji did not give his daughter breakfast. He would get angry with Baiji and tell her to give the girl a glass of milk to drink. There would be a fight, but Mummy says that for all that anger and fighting, Bauji too did not ensure that she was well fed. The difference between girls and boys was clear whenever it came to food. When almonds came from Kashmir, Khojinder had pockets full of them, as he used to stammer. Afterwards, she would bully Khojinder and get some almonds from him. If corn came from the land, the biggest corn cob went to Khojinder. Mummy says she remembers that when she was ten, she raised a ruckus that she wanted the bigger corn cob. Bauji got angry with Baiji and they started fighting. Mummy says, “When they started fighting I forgot the corn.”

Mummy says she tried not to show her resentment or complain about her mother, for it would lead to fights. But that meant she was never good at directly asking for what she wanted. She became weak and began to have bouts of fever. Bauji began to fear his daughter would get TB like her mother. But then, a Muslim tenant on their land in Dehra Khalsa, who could not pay his rent, gave them his buffalo. That was the saving of her. “I could then drink as much buttermilk as I liked. Baiji would not stop me. Even in the coldest months, in December and January, I would drink three to four glasses of buttermilk. She would give me milk sometimes, but watery.”

Singh beautifully weaves together the parallel stories of a brilliant mother and daughter, each in her own way struggling to find her  identity beyond the limited expectations for upper middle class women whose passionate drive for knowledge propels them to reject the confines of a world where girls ‘eat last.’  Singh eventually must return home to discover the truth behind the fragmented history of ‘Mummy’s’ transformation.  It is this unfolding discovery, told in riveting everyday detail, that makes Singh’s book impossible to put down.

Supriya Singh is a talented and natural story teller, weaving her mother’s life with many others and giving us an insight into what it takes to survive loss and love.  A quietly feminist book.

The Melbourne launch was an overwhelming and humbling experience. It was a sold out event with 90 people at Machan for a vegetarian meal on Gandhi Jayanti. An evening of friendship, good will and connection. A particular thank you to Raj Ji for launching the book with such sincerity and authenticity. Also thank you to Meera Govil of the Eltham Book Shop for organising the event and believing in the book. 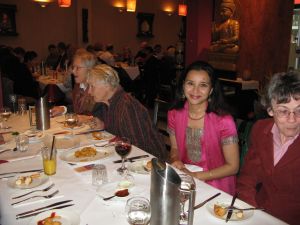 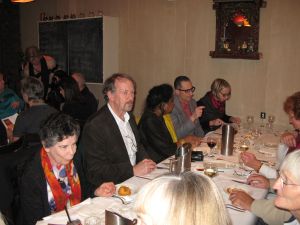 Khalsa College for Women in Amritsar

Jasvinder Sidhu, a colleague from RMIT who led an Australian group on a visit to Punjab, took a copy of The Girls Ate Last to present to Dr. Sukhbir K Mahal, Principal of Khalsa College for Women in Amritsar. My mother was the College’s founding Principal, 1969-1972.  As a result I have connected again with the College through its Principal.

From The Sunday Tribune, 2 March 2014 by Neha Saini

Observing the world around her, a renowned sociologist and scholar turned her into an author. While Supriya Singh had been sharing her own experiences through her books, her latest is about her mother.

Titled “Girls Ate Last: Partition, Education and the Life of Inder Kaur,” the book is about Singh’s mother who was one of the leading educationists and founding principal of three colleges including the Khalsa College of Education for Women. At a book launch and reading session, the author opened up about the purpose of writing a memoir to her mother and the sociological gender disparities during one of the darkest times in the country’s history. “Partition was responsible for dislocation of the close-knit family network of our society at the time, which kept the women home-bound and secluded. There were a lot of silences in our social history about women, but during Partition and after that, the women were forced to think and act, pushed by circumstances. My mother’s story is quite similar and so I wanted to share it,” shares the Melbourne-based author.,,,

Giving details of her mother, from Inder Kaur’s birth in 1911 to her growing up years in Pakistan, Partition and her education in Delhi after that, the book traces sensitive gender issues. “Girls were supposed to eat last in the household, only after all the men in family were done eating. They had limited education and never encouraged to ask what they want, but only to pick between the choices given to them. Girls knew that they got less than the boys in the family, but never created fuss about it,” says Singh, who has earlier written extensively about money and social shaping.

But her book is also a story of survival and enablement. “It was not women liberalisation that prompted my mother to pursue education post-Partition, but a simple, traditional reason that her daughters should get good education. She took up teaching my elder sister Punjabi and later gave private tuitions to the kids in her school. It was also a source of income for her household. While she did that, encouraged by the response she completed her graduation. The fact that she received honour for what she could give, turned her survival turned into emancipation when she wanted to pursue her Master’s in Punjabi, she was one of the first two women in Delhi University during 1956 to study Punjabi.”

From there, her journey into becoming one of the leading educationists and founding principal of Khalsa College for women became an inspiration. Surpiya believes that the biggest driving force for her mother was the Partition. “Some of the biggest movements of the twentieth century like the Jallianwala Bagh tragedy, Namdhari movement and many, bypassed my mother. But the Partition shook her to the core and changed her life. Her reaction to it was that she could get an education, worked towards enabling other girls do the same, with a quiet feminity,” says Supriya …

Next on her agenda seems to be re-connecting with her Punjabi roots. “I have never really experienced Punjab, but through my research, I have been travelling to villages, small towns and interacting with people about their lives. So, my next book is already in the making,” she signs off.

MELBOURNE, OCT 1. Professor Supriya Singh has unveiled an extraordinary story of her mother, Inder Kaur who became symbol of women empowerment and a guiding force for all women. Read more…